Skip to content
Pray for our country and for the truth to be revealed, Psalm 5.

Chinese Billionaire Has Called For The Execution Of Bob Fu

Please pray for Bob Fu and his family.

Bob Fu and ChinaAid are in danger. A Chinese Communist Party (CCP) operative urged his supporters to eliminate Bob Fu and other renown Chinese dissidents in late September.

This order must have come straight from Beijing. The Chinese Communists want Bob silenced since he’s a leading advocate for Christian persecution in China.

Instructions to eliminate Bob Fu and others have gone out over YouTube and other social media channels. Protesters demonstrated in front of Bob’s house on September 26th, threatening his wife and children.

The agenda is clear. Stop the Christian witness and any criticism of the Chinese Communist Party. Extra security is being added for Bob and his family. Your prayers and financial support are needed more than ever… Read Full Article By China Aid

“We will send at least 100 to 200 comrades to your house tomorrow. We will see how much power you have in the U.S,” a Chinese man announced on YouTube September 27th, sending a message to Rev. Bob Fu, an activist and former prisoner of faith in China. The next day, Fu was hit with alarming news: Chinese thugs were outside his Texas home intimidating his wife and kids.

Fu was in Washington, D.C. preaching at The Return, a globally viewed event for repentance and prayer when he learned of this from his wife. President Trump, First Lady Melania Trump, Vice President Mike Pence, Rev. Franklin Graham, and many others attended the service… Read Full Article By Self Govern

Listen to Bob explain to the crowd that his family had just been targeted: 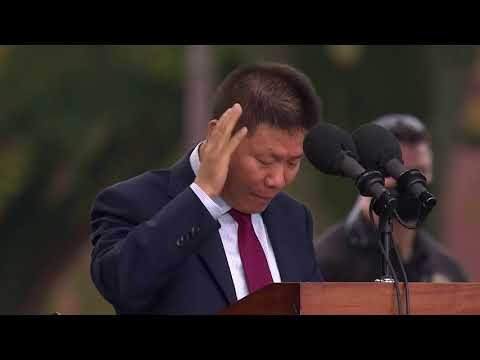 …The man behind these threatening videos was no regular communist bully. He is billionaire Guo Wengui (alias Miles Kwok) who fled from the communist country in 2014 who now spreads false information and incites violence towards various dissidents and human rights activists. He paints himself as a Chinese political dissident, but his lavish lifestyle and violence-instigating behavior suggest something more sinister… By Self Govern Continue

Our prayer for Bob Fu and his family.

Psalm 91 – My Refuge and My Fortress

1 He that dwelleth in the secret place of the most High shall abide under the shadow of the Almighty.

2 I will say of the LORD, He is my refuge and my fortress: my God; in him will I trust.

3 Surely he shall deliver thee from the snare of the fowler, and from the noisome pestilence.

4 He shall cover thee with his feathers, and under his wings shalt thou trust: his truth shall be thy shield and buckler.

5 Thou shalt not be afraid for the terror by night; nor for the arrow that flieth by day;

6 Nor for the pestilence that walketh in darkness; nor for the destruction that wasteth at noonday.

7 A thousand shall fall at thy side, and ten thousand at thy right hand; but it shall not come nigh thee.

8 Only with thine eyes shalt thou behold and see the reward of the wicked.

9 Because thou hast made the LORD, which is my refuge, even the most High, thy habitation;

10 There shall no evil befall thee, neither shall any plague come nigh thy dwelling.

11 For he shall give his angels charge over thee, to keep thee in all thy ways.

12 They shall bear thee up in their hands, lest thou dash thy foot against a stone.

13 Thou shalt tread upon the lion and adder: the young lion and the dragon shalt thou trample under feet.

15 He shall call upon me, and I will answer him: I will be with him in trouble; I will deliver him, and honour him.

16 With long life will I satisfy him, and shew him my salvation.